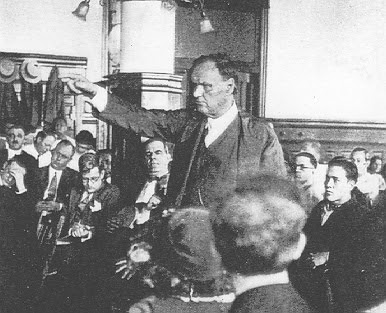 in 8th grade.  Seeing Spencer Tracy as Darrow
in the movie version helped too.  Somewhere along the line, one
of my teachers told this story (this from the day when smoking
was not a no-no):  Darrow, as a defense attorney, was always
on the look out for an edge.  One morning, just before Court
opened for the the final argument stage of a trial, Darrow stuck
a thin wire inside of one of his favorite stogies.  Later, as the
prosecutor began his closing argument, Darrow, with great
deliberation, unwrapped and lit the cigar. While the prosecutor
droned on, Darrow, slowly and contentedly puffed away.
Gradually, the jury began to notice the ash on Darrow's cigar
getting longer and longer.  They began to pay less attention to the
prosecutor and paid more attention to the growing ash at the end
of Darrow's cigar.  The ash, held in place by the thin wire, never
fell.  The jury, their attention diverted, never heard the
prosecutor.  Darrow's client was acquitted and justice served.
Who knows if the tale is true, I just always wanted it to be so.

Here are some quotes attributed to Darrow:

To think is to differ.


You can only protect your liberties in this world by protecting
the other man's freedom. You can only be free if I am free.


The litigants and their lawyers are supposed to want justice,
butin reality, there is no such thing as justice, either in or
out of court.  In fact, the word cannot be defined.


If a man is happy in America, it is considered he is doing
something wrong.


The first half of our lives are ruined by our parents and the
second half by our children.


As long as the world shall last there will be wrongs, and if
no man objected and no man rebelled, those wrongs would
last forever.


The law does not pretend to punish everything that is
dishonest. That would seriously interfere with business.


Laws should be like clothes. They should be made to fit the
people they serve.


Lost causes are the only ones worth fighting for.


No other offense has ever been visited with such severe
penalties as seeking to help the oppressed.


Chase after the truth like all hell and you'll free yourself,
even though you never touch its coat tails.


Even if you do learn to speak correct English, whom are
you going to speak it to?


I am a friend of the working man, and I would rather be his
friend, than be one.


I do not consider it an insult, but rather a compliment to be
called an agnostic. I do not pretend to know where many
ignorant men are sure - that is all that agnosticism means.


I have suffered from being misunderstood, but I would have
suffered a hell of a lot more if I had been understood.


Just think of the tragedy of teaching children not to doubt.


I have never killed a man, but I have read many obituaries
with great pleasure.


When I was a boy I was told that anybody could become
President; I'm beginning to believe it.


History repeats itself, and that's one of the things that's
wrong with history.


The trouble with law is lawyers.
Posted by Steve Layman at 2:03 AM

Email ThisBlogThis!Share to TwitterShare to FacebookShare to Pinterest
Labels: Gone but not forgotten, Heroes, Law, Quotes