Another wee slice of American history.......

With Lindbergh temporarily unavailable, what America needed was some kind of sublimely pointless distraction, and a man named Alvin "Shipwreck" Kelly stood ready to provide it.  At eleven in the morning of June 7, Kelly clambered to the top of a fifty-foot flagpole on the roof of the St. Francis Hotel in Newark, New Jersey, and sat there.  That was all he did, for days on end, but people were enchanted and streamed to Newark to watch. 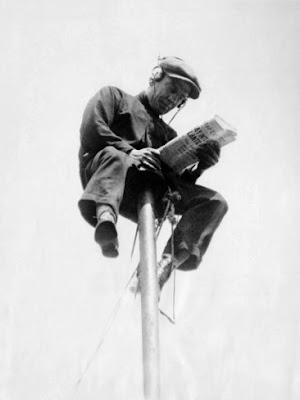 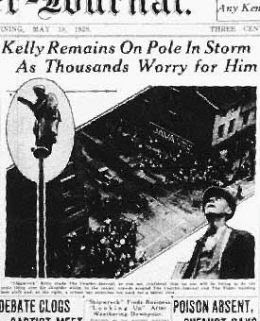 Kelly would reside for days or weeks on a tiny perch - a padded disk about the size of a seat on a bar stool - attached to a flagpole on the top of a tall building.  The most devoted admirers paid 25 cents to go onto the hotel rooftop, where they could see Kelly at comparatively close range and even engage him in conversation. ....During the whole of his time aloft, he didn't leave the perch.  No record appears to indicate how he dealt with bodily functions.  For two days beforehand and throughout the sitting he took no solid food - just milk, broth, and coffee - which may partly answer the obvious question.  He smoked four packs of cigarettes a day.  Otherwise he just sat.  He billed himself as "The Luckiest Fool Alive."

Email ThisBlogThis!Share to TwitterShare to FacebookShare to Pinterest
Labels: A little slice of Americana, books, History, Photography, What?