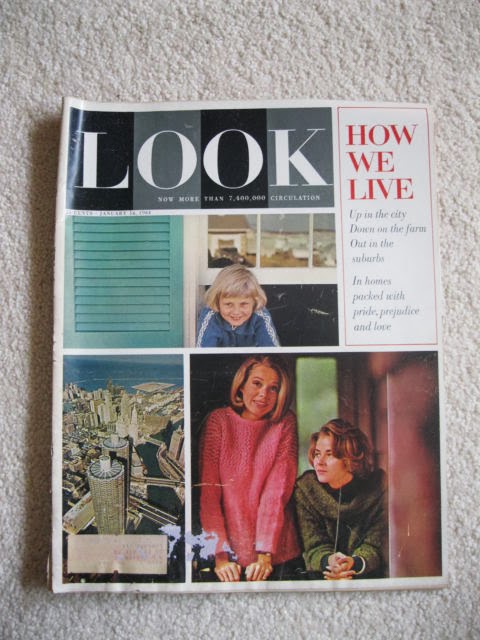 On January 14, 1964, Rockwell published his first illustration in Look.  The Problem We All Live With was spread over two pages inside the magazine.  It had a wonderful directness to it, in part, because it appeared without a caption, or a chunk of explanatory text.  True, it was introduced by a tan-colored page with minimal type:  "Painted for Look by Norman Rockwell."  As readers turned to page 21 and came upon the painting, they must have wondered, "What is this?"  There she was, an African-American girl - a six-year-old in a chaste white dress, a matching bow in her hair - walking to school.  She is escorted by four uniformed officers in lockstep.
The background of the painting conveys the background of the story.  A defaced, dinged stucco wall is inscribed with a slur ("nigger") and, in the upper left, the initials KKK, the creepiest monogram in American history.  The girl, we can see, is a person of exemplary dignity.  She stares ahead as she walks, declining to acknowledge the graffiti or the still-dripping mess in the center of the wall, a tomato that was tossed by a demonstrator and which had thankfully missed the girl's head.
Ruby Bridges was the first African-American to attend the all-white William Frantz Elementary School in New Orleans, as a result of court-ordered desegregation.  And Rockwell's painting chronicled that famous day.  On the morning of November 14, 1960, shortly before 9:00 a.m., federal marshals dispatched by the U. S. Justice Department drove Ruby and her mother to her new school, which was only five blocks from their house.  It was her first day of first grade and, according to news accounts, she had to walk by a crowd of crazy hecklers outside the school, most of them housewives and teenagers.  She did this every day for weeks, and then weeks became months.  In retaliation, white Louisiana parents withdrew their kids from school and only one teacher was willing to help Ruby, the sainted Barbara Henry of Boston.  So Ruby sat alone with Mrs. Henry in an empty classroom and learned how to read and how to add numbers.
-Deborah Solomon, as excerpted from American Mirror:  The Life and Art of Norman Rockwell
Posted by Steve Layman at 12:30 AM