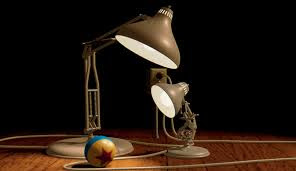 "Craft is what we are expected to know;  art is the unexpected use of our craft."
-Ed Catmull

The above photo comes from "Luxo Jr.", the computer animated short film that truly launched Pixar.  That short film (under two minutes) may be viewed here.  Here is Wikipedia's conclusion about Luxo Jr.:  "In 2014, Luxo Jr. was deemed "culturally, historically, or aesthetically significant" by the Library of Congress and selected for preservation in the National Film Registry.[5]"
Posted by Steve Layman at 12:15 AM