The Epicurean Dealmaker strings words together in a most delightful and thoughtful manner.  In this essay he defends jargon in general and "management-speak" in particular.  Some excerpts:

Sure, like any language—English, for example—management-speak can be used “to deflect blame, complicate simple ideas, obscure problems, and perpetuate power relations.” But that is a function of language. And make no mistake: bureaucratese is its own language. Or, to be more precise, its own idiom. Idioms evolve organically among the members of a group sharing common interests and concerns to better communicate those very interests and concerns. This can take the form of abbreviation, where a commonly understood word or phrase can convey an entire sentence or conversation; motivation, where a word or phrase is understood to inspire action; or community-building, where the word or phrase triggers thoughts and actions of allegiance and commonality among its audience. These all necessarily exclude people outside the in-group, but this does not need to be a sinister thing. Try to follow a conversation among particle physicists in the Cal Tech lunchroom one day if you doubt me.
Human society is complex and highly specialized. It should be no surprise that we have erected our own Tower of Babel of mutually incomprehensible idioms, even within the English language, in order to cope. If nothing else, management-speak and other specialized idioms thrive because they are efficient: they save lots of time which conversationalists would otherwise waste in trivial itemizing and explication of concepts, notions, beliefs, and the like which they already share and understand. Business speak, like many other idioms, shares the additional motivation that it is primarily a rhetorical device, designed to summon and direct the energies of hundreds, thousands, or even hundreds of thousands toward the pursuit and execution of common goals which the rest of society does not necessarily share. Its practitioners really don’t care what unwashed outsiders think about it.
Saying business jargon is awkward is like complaining that white lies are untrue: accurate, as far as it goes, but it misses the entire point. 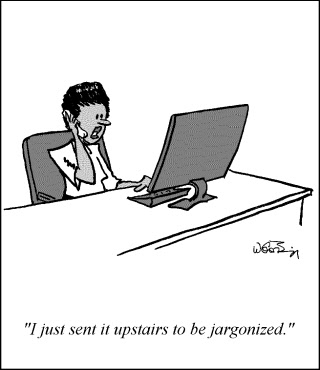