You may have seen this chart used as in indictment on our current economic situation, and maybe it is.  But  before going overboard, consider this:

"Incomes have not improved for the bottom 80% of Americans
over the last decade.  Before I go on, recognize that the income
distribution is not static.  The same people are not in each
decile today, as were in 2006." 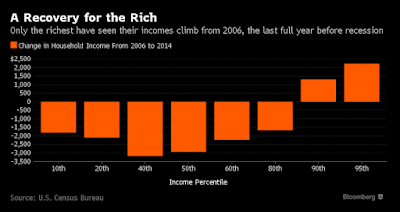 The chart comes from this David Merkel post, wherein he lists a host of causes for mobility between the "deciles."  Read it yourself, but my take-away is that technology driven change has driven a significant amount of our "income inequality."   Here is another wee excerpt:


"...many feel that the comfortable life that was theirs has been
denied to them by forces beyond their control. They think that
shadowy elites want to turn previously well-off people into
modern serfs.   It’s a tempting thought, because most of us
don’t like to blame ourselves."