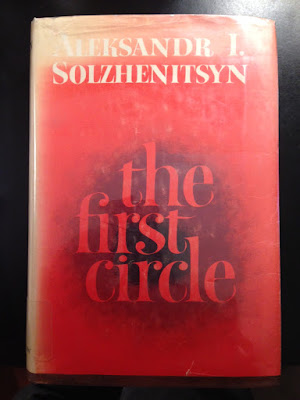 The fretwork hands stood at five past four.
In the dying light of the December day the bronze face of the clock on the shelf looked black.
The double panes of the tall window looked down on the busy street and the janitors shoveling dirty brown snow, newly fallen but already soggy, form under the feet of the pedestrians.
Staring at all this without seeing it, State Counselor Second Rank Innokenty Volodin leaned against the edge of the window and whistled a thin, drawn-out note.  His fingertips leafed through the glossy, bright-colored pages of a foreign magazine.  But he saw none of it.
State Counselor Second Rank Innokenty Volodin, whose rank in the diplomatic service was equivalent to that of lieutenant colonel in the army, was tall and narrowly built.  Dressed not in uniform but in a worsted suit, he looked more like a young gentleman of leisure than an executive in the Ministry of Foreign Affairs.
It was time either to turn on the lights in the office, which he did not do, or else go home.  He made no move to do that, either.
Four o'clock did not mean the end of the working day but of its daytime, or lesser, part:  everyone would now go home to have dinner and take a nap, and then, from ten o'clock on, thousands of windows in sixty-five Moscow ministries would light up again.  There was only one person, behind a dozen fortress walls, who could not sleep at night, and he had taught all official Moscow to keep vigil with him until three or four in the morning.  Knowing the nocturnal habits of the Sovereign, the three score ministers sat up like schoolboys in expectation of a summons.   So as not to get sleepy they called out their deputies, and the deputies harassed their section heads;  reference librarians on stepladders pored over their card catalogues, filing clerks dashed down corridors, secretaries broke pencil points.
And even today, on the eve of Western Christmas, when for two days all the embassies had been quiet, frozen up, their phones still, and people were probably right this minute sitting down around their Christmas trees, there would still be night work in their own ministries.  Some would play chess and others would tell stories and still others doze on couches - but there would be work.
Volodin's nervous fingers swiftly and aimlessly leafed through the magazine.  And all the time within him the pang of fear now rose and burned a little, then subsided and chilled.
How well Innokenty remembered from childhood the name of Dr. Dobroumov!  At that time he had not yet become such a luminary.  They did not send him abroad with delegations.  He was not even known as a scientist, but simply as a medical doctor, and he went out to make house calls.  Innokenty's mother was often indisposed, and she always tried to get hold of Dobroumov.  She had faith in him.  The moment he arrived and took off his sealskin cap in the entry, the whole place would be filled up with an atmosphere of good feeling, calm, and assurance.  He never stayed less than half an hour by the bedside.  He asked about every complaint;  and then, as though it gave him great satisfaction, he examined the patient and expounded the prescribed cure.  On his way out, he never passed the boy without asking him a question, and he would stop to listen to the reply, as if he seriously expected to hear something intelligent.  The doctor was graying even then.  What would he look like now?
Innokenty flung down the magazine and, tense and preoccupied, paced the room.
Should he telephone or not?
If this had involved some other professor of medicine whom he didn't know personally, Innokenty would never have thought twice about trying to warn him.  But Dobroumov!
Could there possibly be a way of identifying a person speaking over a public telephone - if one wasted no time and hung up and left quickly?  Could they recognize a voice over the phone?  Surely there was no technique for that.
He went to his desk.  In the twilight he could still make out the top sheet of instructions covering his new assignment.  He was to leave before New Year's Day, or Wednesday or Thursday.
It was more logical to wait.  It was more reasonable to wait.
Oh, God!  A shudder gripped his shoulders, so unaccustomed to such burdens.  It would have been better if he had never learned about it.  If he know nothing about it, had never learned ...
He took the instructions and everything else off the desk and carried them all to the safe.
How, indeed, could anyone condemn what Dobroumov had promised?   It showed the generosity of a talented man.  Talent is always conscious of its own abundance and does not object to sharing.

-Aleksandr I. Solzhenitsyn.  The First Circle

Email ThisBlogThis!Share to TwitterShare to FacebookShare to Pinterest
Labels: 1968, books, Fifty Years Ago