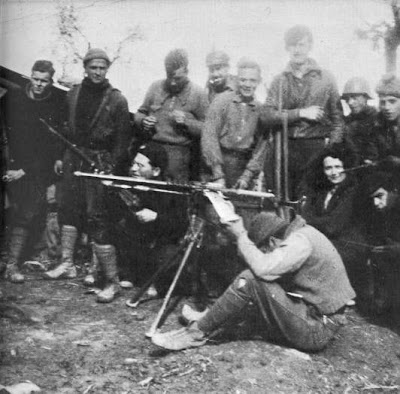 Eric Arthur Blair briefly participated in the fighting of the Spanish Civil War - on the Republican side, although things were pretty complicated in 1937 Spain and he was attached to Workers' Party of Marxist Unification (POUM — Partido Obrero de Unificación Marxista).  He was wounded by a sniper's bullet to the throat, suspected of actually being a fascist, and returned (escaped) to England.  A year later, under the pen name of George Orwell, he penned his classic, Homage to Catalonia.

"Meanwhile nothing happened, nothing ever happened.  The English has got into the habit of saying that this wasn't a war, it was a bloody pantomime.  We were hardly under direct fire from the Fascists.  The only danger was from stray bullets, which, as the lines curved forward on either side, came from several directions.  All the casualties at this time were from strays.  Arthur Clinton got a mysterious bullet that smashed his left shoulder and disabled his arm, permanently, I am afraid.  There was little shell-fire, but it was extraordinarily ineffectual.  The scream and crash of shells was actually looked upon as a mild diversion.  The Fascists never dropped their shells on our parapet.  A few hundred yards behind us there was a country house, called La Granja, with big farm-buildings, which was used as a store, headquarters, and cook-house for this sector of the line.  It was this that the Fascist gunners were trying for, but they were five or six kilometres away and they never aimed well enough to more than smash the windows and chip the walls.  You were only in danger if you happened to be coming up the road when the firing started, and the shells plunged into the field on either side of you.  One learned immediately the mysterious art of knowing by the sound of a shell how close it will fall.  The shells the Fascists were firing at this period were wretchedly bad.  Although they were 150 mm. they only made a crater about six feet wide by four deep, and at least one in four failed to explode.  There were the usual romantic tales of sabotage in the Fascist factories and unexploded shells in which, instead of a charge, there was found a scrap of paper saying 'Red Front,' but I never saw one.  The truth was that the shells were hopelessly old; someone picked up a brass fuse-cap stamped with the date, and it was 1917.  The Fascist guns were of the same make and calibre as our own, and the unexploded shells were often reconditioned and fired back.  There was said to be one old shell with a nickname of its own which travelled daily to and fro, never exploding."
-George Orwell, as excerpted from Homage to Catalonia

photo courtesy of
Posted by Steve Layman at 12:44 AM