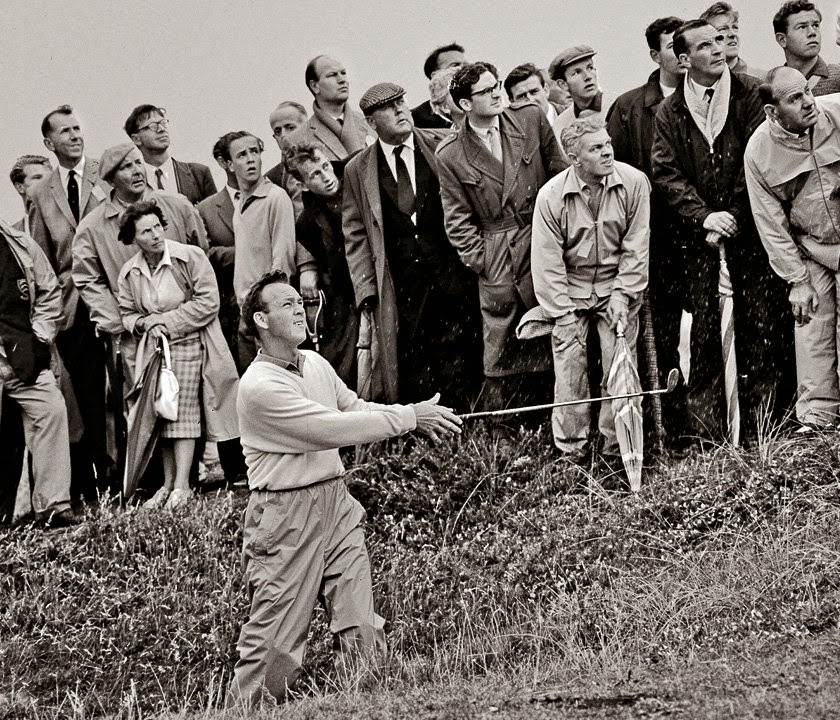 Was this a day to play golf?  Maybe not, but I was stuck with it.  I watched Colin Bannatyne creakily approach his ball, pause, calmly hit it with his corkscrew swing over the grassy mound in the general direction of the hidden green.  I called, "Good shot!" but my words were whipped away.  I could have sworn I saw a hint of a smile.
He was right, of course.  Can't change the course, so adjust to the conditions.  Can't hit into this gale, so play with it.  It's absurd to get angry at rain, or old age for that matter.  Mr. Bannatyne seemed possessed of unshakeable equanimity as he addressed his putt on the first green, the ball quivering in the wind.
As we both holed out for 6, he handed me back my ball and murmured, "Grand day."
As we tacked towards the next tee, I was picturing the annoyance, the air of being put-upon, of many major golfers when the wind really blows in a British Open.  In a wet gale, yardage becomes irrelevant, it's all down to instinct and feel - who can best adjust, improvise, who really has golf in their bones.
My boyhood hero-worship of Arnold Palmer stemmed from a photo of him on the way to winning the Open in a force 8 gale at Birkdale, 1961.  He's in full foul-weather gear, windcheater dark with rain, trousers whipped tight around his legs by the wind as he crouches at the top of his back swing, the light of battle in his eye, and the caption read:  Arnold Palmer about to drill another 1 iron into the gale.  Who would not warm to such a man?

-Andrew Greig, Preferred Lies:  A Journey to the Heart of Scottish Golf
Posted by Steve Layman at 12:20 AM