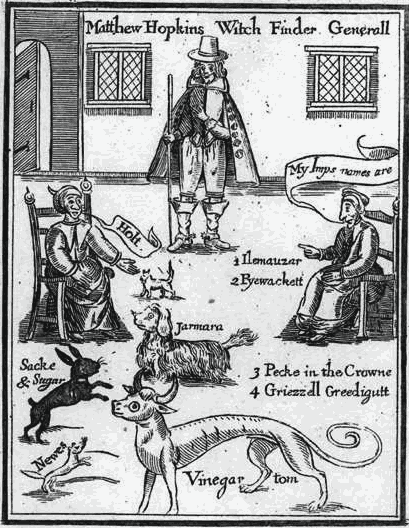 Hobbes was sceptical of tales about ghosts and witches, and this scepticism was itself regarded in some quarters as evidence of irreligion, or at least insufficient respect for spiritual matter.  Denying that there was such a thing as a witch was almost as bad as being one.  There were other enlightened thinkers who shared Hobbes's disdain for stories of supernatural creatures stalking the villages of England;  but the belief in witches was a powerful force in his day, perhaps because these were unsettled times.  A third or more of all the people executed for witchcraft in England between the fifteenth and eighteenth centuries were dispatched in the mid-1640s by Matthew Hopkins, the self-described "Witch-finder General," and his associates, just when Hobbes was working out the consequences of his materialist philosophy.

-Anthony Gottlieb,  The Dream Of Enlightenment:  The Rise Of Modern Philosophy

If you want to read something scary, read this.

Email ThisBlogThis!Share to TwitterShare to FacebookShare to Pinterest
Labels: books, History, Human Nature, Philosophy, scary stories, Sceptics, Those Were The Days My Friend, What strange times we live in