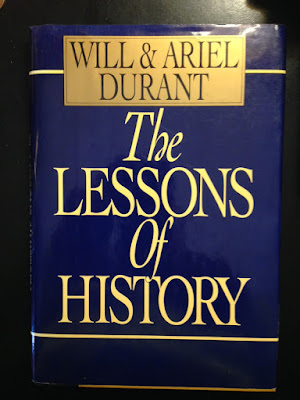 Morals are the rules by which a society exhorts (as laws are the rules by which it seeks to compel) its members and associations to behavior consistent with its order, security, and growth.  So for sixteen centuries the Jewish enclaves in Christendom maintained their continuity and internal peace by a strict and detailed moral code, almost without help from the state and its laws.
A little knowledge of history stresses the variability of moral codes, and concludes that they are negligible because they differ in time and place, and sometimes contradict each other.  A larger knowledge stresses the universality of moral codes, and concludes their necessity.
Moral codes differ because they adjust themselves to historical and environmental conditions.  If we divide economic history into three stages - hunting, agriculture, industry - we may expect that the moral code of one stage will be changed in the next.  In the hunting stage a man had to be ready to chase and fight and kill.  When he had caught his prey he ate to the cubic capacity of his stomach, being uncertain when he might eat again; insecurity is the mother of greed, as cruelty is the memory - if only in the blood - of a time when the test of survival (as now between states) was the ability to kill.  Presumably the death rate in men - so often risking their lives in the hunt - was higher than in women;  some men had to take several women, and every man was expected to help women to frequent pregnancy.  Pugnacity, brutality, greed, and sexual readiness were advantages in the struggle for existence.  Probably every vice was once a virtue - i.e., a quality making for the survival of the individual, the family, or the group.  Man's sins may be the relics of his rise rather than the stigmata of his fall.

Email ThisBlogThis!Share to TwitterShare to FacebookShare to Pinterest
Labels: 1968, books, Fifty Years Ago