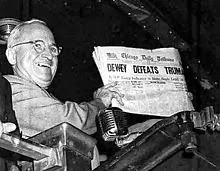 Harry Truman, son of a Missouri farmer, was a college drop-out, a captain of an artillery battery during WWI and somewhat of a war hero, a Kansas City haberdasher, a Pendergast machine politician, a U.S. Senator, the vice president (for 82 days), and the 33rd president of the United States.  In his almost eight years as president, Truman authorized the use of two atomic weapons against Japan, saw to the end of WWII, approved the Marshall Plan for rebuilding Europe, oversaw the Berlin Airlift and creation of NATO, supported the creation of Israel, pulled off one of the biggest upsets in presidential election history, committed U. S. troops to the defense of South Korea, fired General Douglas MacArthur, and survived an assassination attempt.  All in a day's work.  Here are some quotes attributed to Truman:


"I always remember an epitaph which is in the cemetery at Tombstone, Arizona. It says: 'Here lies Jack Williams. He done his damnedest.' I think that is the greatest epitaph a man can have - When he gives everything that is in him to do the job he has before him. That is all you can ask of him and that is what I have tried to do."

"Some of my best friends never agree with me politically."

"Once a government is committed to the principle of silencing the voice of opposition, it has only one way to go, and that is down the path of increasingly repressive measures, until it becomes a source of terror to all its citizens and creates a country where everyone lives in fear."

'No nation on this globe should be more internationally minded than America because it was built by all nations."

"I never did give anybody hell. I just told the truth, and they thought it was hell."

"Of course, there are dangers in religious freedom and freedom of opinion. But to deny these rights is worse than dangerous, it is absolutely fatal to liberty. The external threat to liberty should not drive us into suppressing liberty at home. Those who want the Government to regulate matters of the mind and spirit are like men who are so afraid of being murdered that they commit suicide to avoid assassination."

"Carry the battle to them. Don't let them bring it to you. Put them on the defensive. And don't ever apologize for anything."

"I learned that a great leader is a man who has the ability to get other people to do what they don't want to do and like it."

"Whenever you have an efficient government you have a dictatorship."

"We know now that the basic proposition of the worth and dignity of man is not a sentimental aspiration or a vain hope or a piece of rhetoric. It is the strongest, most creative force now present in this world."
Posted by Steve Layman at 12:45 AM