In the early days of planning, we sort of ignored the underground storm water and sanitary sewer lines.   I guess we thought we would just tie into the Old School's existing line.  Let's see:  twenty-nine new apartments with showers and dishwashers and washing machines dumping waste water into an eighty-year old 8" clay tile.   What could possibly go wrong?  On top of that, it was sort of a mystery where the rain water from the gutters and downspouts was going.   The downspouts disappeared below grade and we weren't exactly sure where the water went from there.   Into the sanitary sewer system?  Into the ground?  It was hard to tell.  A preliminary conversation with the City Engineer about tying the new downspouts directly into the sanitary sewer system was met with a funny look.  (A bit of a back story:   The older sections of Newark are served by a combination sanitary and storm sewer.  EPA frowns on such things today, for good reason.  The City is actually in the middle of a massive, and very expensive, project separating the storm water system from the sanitary sewer system.  That separation is not scheduled anytime soon in the Old School's neighborhood. Also, West Main between 5th and 6th, which is the longest block in the downtown and is where the Old School resides, is not served by any storm water inlets.   For the most part, heavy rains caused the sidewalk in front of the Old School to flood.)  Anyway, back to the story.  Once we started work, we got a bit wiser.  Engineers were consulted and plans drawn to both install all new sanitary sewer lines from the building to the existing manhole in the middle of West Main, as well as new storm water lines, connecting the existing gutters and downspouts to a brand new catch basin that was installed along our front curb.  While not accounted for in the preliminary budget, this was an expense best not avoided. 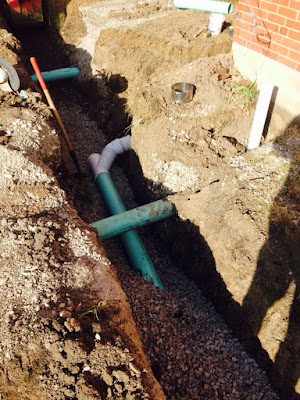 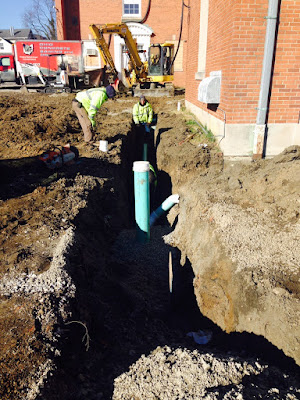 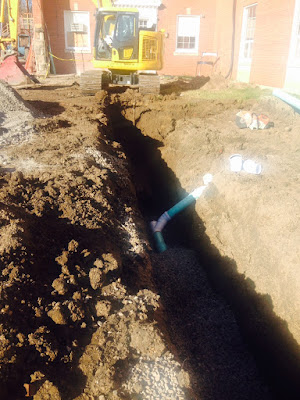