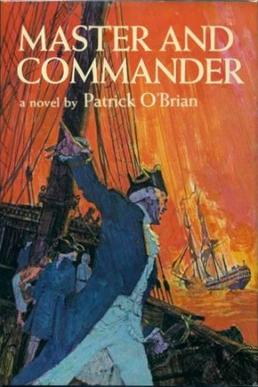 The music-room in the Governor's House at Port Mahon, a tall, handsome, pillared octagon, was filled with the triumphant first movement of Locatelli's C major quartet.   The players, Italians pinned against the far wall by rows and rows of little round gilt chairs, were playing with passionate conviction as they mounted towards the penultimate crescendo, towards the tremendous pause and the deep liberating final chord.  And on the little gilt chairs at least some of the audience were following the rise with an equal intensity:  there were two in the third row, on the left-hand side; and they happened to be sitting next to one another.  The listener farther to the left was a man of between twenty and thirty whose big form overflowed his seat, leaving only a streak of gilt wood to be seen here and there.  He was wearing his best uniform -- the while lapelled blue coat, white waistcoat, breeches and stockings of a lieutenant in the Royal Navy. with the silver medal of the Nile in his buttonhole -- and the deep white cuff of his gold-buttoned sleeve beat the time, while his bright blue eyes, staring from what would have been a pink-and-white face it it had not been so deeply tanned, gazed fixedly at the bow of the first violin.  The high note came, the pause, the resolution, and with the resolution the sailor's fist swept firmly down upon his knee.  He leant back in his chair, extinguishing it entirely, sighed happily and turned towards his neighbor with a smile.  The words 'Very finely played, sir.  I believe' were formed in his gullet if not quite in his mouth when he caught the cold and indeed inimical look and heard the whisper, 'If you really must beat the measure, sir, let me entreat you to do so in time, and not half a beat ahead.'

Patrick O'Brian, being the opening paragraph from Master & Commander