A great nation is not saved by wars,  James said;  it is saved "by acts without external picturesqueness;  by speaking, writing, voting reasonably;  by smiting corruption swiftly; by good temper between parties;  by the people knowing true men when they see them, and preferring them as leaders to rabid partisans or empty quacks."   This is the behavior monuments should honor.

-Louis Menand,  as excerpted from The Metaphysical Club:  A Story of Ideas in America

(the above quote was spoken by William James in an 1897 oration at the unveiling of the monument in Boston Commons erected in the honor of Civil War hero Robert Gould Shaw). 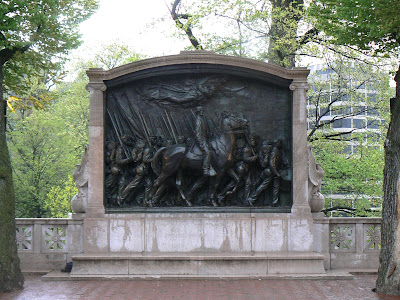