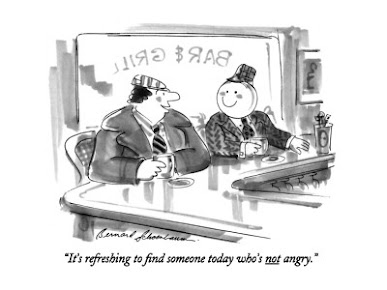 Posted by Steve Layman at 3:32 PM No comments:

The important thing is how we work with something that isn't working.  Being pig-headed and repeatedly doing the same thing over and over again is not the answer.  Persistence should be coupled with the ability to adjust how you approach your challenge.  Trying multiple angles is the key to making your persistence work for you.

-Ben Aldridge, How to Be Comfortable With Being Uncomfortable

Posted by Steve Layman at 5:27 AM No comments:

Posted by Steve Layman at 5:08 AM No comments:

Email ThisBlogThis!Share to TwitterShare to FacebookShare to Pinterest
Labels: Blame it on them, Mistakes were made, Quotes, Responsibility

"History is littered with good ideas taken too far, which are indistinguishable from bad ideas."

Posted by Steve Layman at 5:03 AM No comments:

Email ThisBlogThis!Share to TwitterShare to FacebookShare to Pinterest
Labels: bad ideas, Be careful what you wish for, good idea, History, Quotes

When we agree to live simply, we have little to protect and no desire for acquisition, even for acquisition of any “moral capital.” When we imagine that we are better, holier, higher, more important to God than others, it is a very short step to “justified” arrogance or violence toward those others. It is almost inevitable, in fact, and we are witnessing today how it manifests itself at every level of our societies. If we could eliminate such manufactured and desired superiority, religion might finally become nonviolent in thought, word, and deed.

-Richard Rohr, as cut-and-pasted from here

Posted by Steve Layman at 7:45 PM No comments: 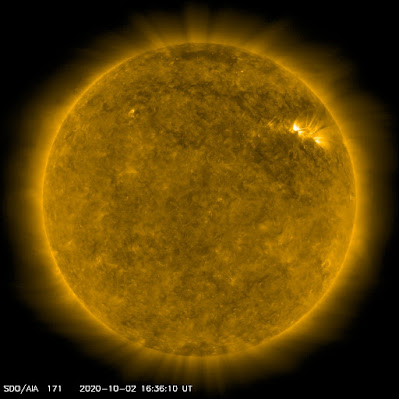 From the wondrous Astronomy Picture of the Day site, where you can learn lots of cool stuff.

Posted by Steve Layman at 7:07 PM No comments:

Email ThisBlogThis!Share to TwitterShare to FacebookShare to Pinterest
Labels: APOD, Hubble, The Sun

NPR’s “Weekend Edition” tried to illustrate the US national debt by saying, “If you stack up 14.3 trillion dollar bills, the pile would stretch to the moon and back twice.”

That does not help. Indeed, it is triply unhelpful, since most of us lack an intuitive grasp either of how far away the moon is or of how many dollar bills there are to the yard, and even if we had both we would still be stuck with the question of whether $14.3tn was a worryingly large debt or not.

More useful is to think of the debt as a sum per person. At the end of 2019, US federal debt was nearly $23tn, which is about $70,000 per US resident. I don’t know whether that is more or less alarming than trying to measure it out in trips to the moon but it is certainly vastly more informative.

-Tim Harford, as lifted from here

Posted by Steve Layman at 6:54 PM No comments:

It's possible to statistically measure whether some decisions were wise.  But in the real world, day to day, we simply don't.  We prefer simple stories, which are easy but often devilishly misleading.

After spending years around investors and business leaders I've come to realize that someone else's failure is usually attributed to bad decisions, while your own failures are usually chalked up to the dark side of risk.  When judging your failures, I'm likely to prefer a clean and simple story of cause and effect, because I don't know what is going on inside your head.  "You had a bad outcome so it must have been caused by a bad decision" is the story that makes the most sense to me.  But when judging myself I can make up a wild narrative justifying my past decisions and attributing bad outcomes to risk.

-Morgan Housel,  The Psychology of Money:  Timeless Lessons On Wealth, Greed, And Happiness

Posted by Steve Layman at 8:19 PM No comments:

Years ago I asked economist Robert Shiller, who won the Nobel Prize in economics, "What do you want to know about investing that we can't know?"

"The exact role of luck in successful outcomes." he answered.

I love that response, because no one actually things luck doesn't play a role in financial success.  But since it's hard to quantify luck and rude to suggest people's success is owed to it, the default stance is often to implicitly ignore luck as a factor of success.

-Morgan Housel, The Psychology of Money:  Timeless Lessons On Wealth, Greed, And Happiness

Posted by Steve Layman at 8:12 PM No comments:

Email ThisBlogThis!Share to TwitterShare to FacebookShare to Pinterest
Labels: books, Good question, Lucky, Success, Your guess is as good as mine

. . . we can learn from out failures only if we accept responsibility for them and examine exactly why we failed.  Blaming someone else and shirking responsibility is a missed learning opportunity.

Posted by Steve Layman at 3:06 PM No comments:

Email ThisBlogThis!Share to TwitterShare to FacebookShare to Pinterest
Labels: continuing education, Mistakes were made, Responsibility

If there is a God, He is infinitely incomprehensible, since, having neither parts nor limits, He has no affinity to us. We are then incapable of knowing either what He is or if He is....

..."God is, or He is not." But to which side shall we incline? Reason can decide nothing here. There is an infinite chaos which separated us. A game is being played at the extremity of this infinite distance where heads or tails will turn up. What will you wager? According to reason, you can do neither the one thing nor the other; according to reason, you can defend neither of the propositions.

Do not, then, reprove for error those who have made a choice; for you know nothing about it. "No, but I blame them for having made, not this choice, but a choice; for again both he who chooses heads and he who chooses tails are equally at fault, they are both in the wrong. The true course is not to wager at all."

Yes; but you must wager. It is not optional. You are embarked. Which will you choose then? Let us see. Since you must choose, let us see which interests you least. You have two things to lose, the true and the good; and two things to stake, your reason and your will, your knowledge and your happiness; and your nature has two things to shun, error and misery. Your reason is no more shocked in choosing one rather than the other, since you must of necessity choose. This is one point settled. But your happiness? Let us weigh the gain and the loss in wagering that God is. Let us estimate these two chances. If you gain, you gain all; if you lose, you lose nothing. Wager, then, without hesitation that He is.

Posted by Steve Layman at 12:19 AM No comments:

Virgil spent some time with God that night, thinking about the way things were—about how somebody like Jud Windrom might now be lying dead somewhere, for no discernible reason—and why they were like that, and why a believer like himself would be going around cursing as he did: goddamnit.

Virgil held intricate unconventional beliefs, not necessarily Christian, bun not necessarily un-Christian, either, derived from his years of studying nature, and his earlier years, his childhood years, with the Bible.  God, he suspected, might not be a steady-state consciousness, omnipotent, omnipresent, timeless.  God might be like a wave front, moving into an unknowable future; human souls might be like neurons, cells of God's own intelligence. . . .

Far out, dude; pass the joint.

Whatever God was, Virgil seriously doubted that he was worried too much about profanity, sex, or even death.  He left the world alone, people alone, each to work out a separate destiny.  And he stranded people like Virgil, who wondered about the unseen world, but were trapped in their own animal passions, and operated out of moralities that almost certainly weren't God's own, if, indeed, he had one.

Virgil further worried that he was a guy who simply wanted to eat his cake, and have it, too—his philosophy, as a born-again once pointed out to him, pretty much allowed him to carry on as he wished, like your average godless commie.

He got to "godless commie" and went to sleep.

And worried in his sleep.

Posted by Steve Layman at 12:11 AM No comments:

Email ThisBlogThis!Share to TwitterShare to FacebookShare to Pinterest
Labels: books, God, Pondering, Your guess is as good as mine
Newer Posts Older Posts Home
Subscribe to: Posts (Atom)