Seek distance from coercive people, especially those who long to command you for your good.

Posted by Steve Layman at 1:32 PM No comments:

Email ThisBlogThis!Share to TwitterShare to FacebookShare to Pinterest
Labels: Be careful what you wish for, books, Control, Quotes 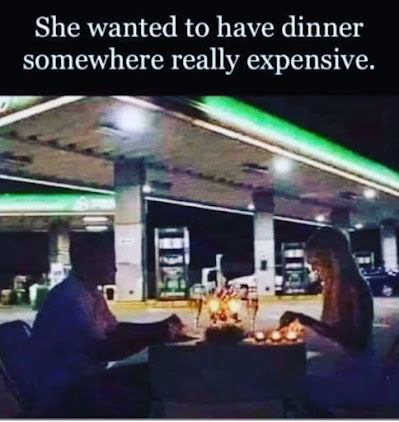 Email ThisBlogThis!Share to TwitterShare to FacebookShare to Pinterest
Labels: A Night Out, Costs of Doing Business, Dining

The fighting had been vicious in the Carolinas since the start of the war.  And it was the more vicious for pitting not American against Briton, nor even American against Hessian, but American against American.  John Adams would say that the American Revolution was in the "minds and hearts" of the American people before it produced the armed struggle between the United States and Britain; what Adams neglected to mention was the degree to which those minds and hearts were at odds, one American against another.  In every colony, and then every state, were thousands of men and women who wanted nothing to do with independence.  They valued the freedom and security they had enjoyed under British rule, and they resented the rebel Patriots for bringing on the war.  These Loyalists cast their lot with the mother country; the result was the shattering of trust among neighbors, the rending of families, and the murderous conflict like that convulsing the Carolina backcountry.

Posted by Steve Layman at 1:31 PM No comments:

Posted by Steve Layman at 1:30 PM No comments:

Email ThisBlogThis!Share to TwitterShare to FacebookShare to Pinterest
Labels: Cartoons, investing, Money, you pays your money and takes your chances

. . . the Western dream of autonomy and choice without limits is, in fact, a prison; that the quest to define ourselves on our own is a kind of El Dorado, driving to madness the many who seek after it; that for our best, highest selves to soar, other parts of us must be tied down, enclosed, limited, bound.

-Sohrab Ahmari,  The Unbroken Thread: Discovering the Wisdom of Tradition in an Age of Chaos

Posted by Steve Layman at 1:30 PM No comments:

Email ThisBlogThis!Share to TwitterShare to FacebookShare to Pinterest
Labels: cover me, Music

The Fall of Rome was largely a fiscal affair.  The low interest rates of the Pax Romana were not sufficient to offset the unhealthy effects of an economy based on conquest rather than commerce.

-William J. Bernstein, The Birth of Plenty: How the Prosperity of the Modern World Was Created

Posted by Steve Layman at 6:26 AM No comments:

When Gilbert turned seven, Madame Chavaniac hired a young local priest, Abbé Fayon, to serve as a live-in tutor.  Fayon taught young Gilbert reading, writing, and math.  He introduced classics like The Iliad, The Odyssey, and Julius Caesar's Commentaries on the Gallic War, which was the story of the conquest of Lafayette's own homeland.  The province of Auvergne derived its name from the Arverni, an ancient Gallic tribe that produced Vercingetorix, the last and greatest leader of the Gallic resistance to the Roman conquest.  The Battle of Gergovia, one of Caesar's rare defeats in the war, occurred practically in Lafayette's backyard.  The boy thrilled with these tales of daring, adventure, courage, rebellion, and glory.  He said later, "I can recall no time in my life when I did not love stories of glorious deeds, or have dreams of traveling the world in search of fame."

-Mike Duncan, Hero Of Two Worlds: The Marquis de Lafayette in the Age of Revolution

Posted by Steve Layman at 6:17 AM No comments:

If a person gave away your body to some passerby, you'd be furious.  Yet you hand over your mind to anyone who comes along, so they may abuse you, leaving it disturbed and troubled—have you no shame in that?

Posted by Steve Layman at 6:04 AM No comments:

The great predicament of our moment in history is the collapse of the public’s trust in democratic institutions. That collapse is long-running, well-established, and catastrophic. Every corner of our fractured political landscape feels compelled to express, vociferously, its anger and repudiation. The default rhetorical posture of the web has become the rant.

Posted by Steve Layman at 7:51 PM No comments:

“I do not see that computers are bringing us one step nearer to anything that does matter to me: peace, economic justice, ecological health, political honesty, family and community stability, good work.”

Posted by Steve Layman at 7:21 PM No comments:

In the short-run it’s difficult to see an easy way out of the current geopolitical nightmare.

In the long-run it’s always a bad idea to bet against the power of the human spirit.

Posted by Steve Layman at 12:29 PM No comments:

Email ThisBlogThis!Share to TwitterShare to FacebookShare to Pinterest
Labels: betting, Bloggery, life is too long to do otherwise, Optimism, Spirit, Us Pesky Humans, Vision

A warehouse of experimental evidence now attests to our cognitive shortcomings: our willingness to jump the inferential gun, to be too quick to draw strong conclusions from ambiguous evidence, and to be too slow to change our minds as disconfirming observations trickle in. A balanced apportionment of blame should acknowledge that learning is hard because even seasoned professionals are ill-equipped to cope with the complexity, ambiguity, and dissonance inherent in assessing causation in history. Life throws up a lot of puzzling events that thoughtful observers feel impelled to explain because the policy stakes are so high. However, just because we want an explanation does not mean that one is within reach. To achieve explanatory closure in history, observers must fill in the missing counterfactual comparison scenarios with elaborate stories grounded in their deepest assumptions about how the world works.

Posted by Steve Layman at 12:26 PM No comments:

Russ Freeman and Craig Chaquico
Posted by Steve Layman at 12:17 PM No comments: