Email ThisBlogThis!Share to TwitterShare to FacebookShare to Pinterest
Labels: Amen, Not news

Go out of your way to find humility when things are going right and forgiveness/compassion when they go wrong.  Because it's never as good or as bad as it looks.  The world is big and complex.  Luck and risk are both real and hard to identify.  Do so when judging yourself and others.  Respect the power of luck and risk and you'll have a better chance of focusing on the things you can actually control.  You'll also have a better chance of finding the right role models.

-Morgan Housel, The Psychology of Money:  Timeless Lessons On Wealth, Greed, And Happiness

Posted by Steve Layman at 7:41 PM No comments:

Evolution has produced a collective intelligence and social norms and institutions which are the 'secret of our success'; these social capabilities provide the reason that humans dominate the planet.

The World Values Survey shows a strong positive correlation across countries between per capita income answers to the question 'Do you think that most people can be trusted?'

Most behaviour is the product of both nature and nurture.  The biological determinism that it is 'all in our genes', and the behaviourist claim that the mind is a 'blank slate' on which anything can be written, are both untenable.

Evolution has fitted humans to deal with many kinds of radical uncertainty encountered in large worlds.  Different attitudes to uncertainty influence the chances of survival of individuals and groups.

. . . as Taleb has emphasised, evolution favors those who survive, and they are not necessarily those who maximise expected value.  Perhaps rational economic man dies out because no one would want to mate with him.

Humans are all better off because we are all different, and because there is no single way to be rational. 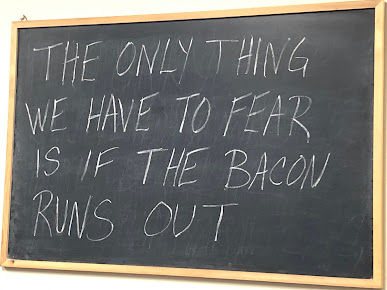 Posted by Steve Layman at 1:00 PM No comments:

Posted by Steve Layman at 8:11 AM No comments:

Email ThisBlogThis!Share to TwitterShare to FacebookShare to Pinterest
Labels: Gone but not forgotten, Movies

November 1, 1952:  The world's first hydrogen bomb was exploded in a test on some unfortunate atoll in the Pacific Ocean.  The difference, for those who care, between an atomic bomb and a hydrogen bomb may be found here. 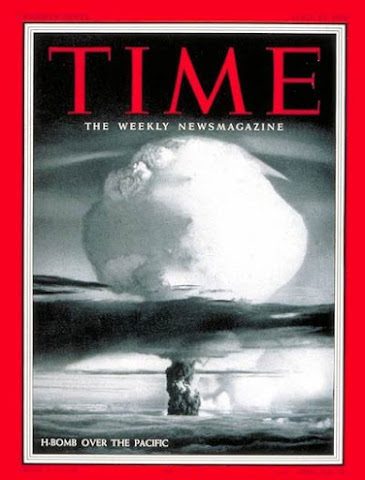 Posted by Steve Layman at 7:31 AM No comments:

From a little after two oclock until almost sundown of the long still hot weary dead September afternoon they sat in what Miss Coldfield still called the office because her father had called it that—a dim hot airless room with the blinds all closed and fastened for forty-three summers because when she was a girl someone had believed that light and moving air carried heat and that dark was always cooler, and which (as the sun shone fuller and fuller on that side of the house) became latticed with yellow slashes full of dust motes which Quentin thought of as being flecks of the dead old dried paint itself blown inward from the scaling blinds as wind might have blown them.  There was a wistaria vine blooming for the second time that summer on a wooden trellis before one window, into which sparrows came now and then in random gusts, making a dry vivid dusty sound before going away: and opposite Quentin, Miss Coldfield in the eternal black which she had worn for forty-three years now, whether for sister, father, or nothusband none knew, sitting so bolt upright in the straight hard chair that was so tall for her that her legs hung straight and rigid as if she had iron shinbones and ankles, clear of the floor with that air of impotent and static rage like children's feet, and talking in that grim haggard amazed voice until at last listening would renege and hearing-sense self-confound and the long-dead object of her impotent yet indomitable frustration would appear, as though by outraged recapitulation evoked, quiet inattentive and harmless, out of the biding and dreamy and victorious dust.

Ed. Note: Your editor confesses to finding Faulkner heavy going hard work.  No denying the man was a craftsman with words and has much to teach about life its ownself, but..........

Posted by Steve Layman at 7:19 AM No comments: