George Marshall, then Army chief of staff, said after the war: “The leader in a democracy has to keep the people entertained. That may sound like the wrong word, but it conveys the thought.”

Most decisions aren’t made on a spreadsheet, where you just add up the numbers and a rational answer pops out. There’s a human element that’s hard to quantify, hard to explain, and can seem totally detached from the original goal, yet carries more influence than anything else.

Posted by Steve Layman at 6:47 AM No comments:

For example: You can be a successful professional without spending time on social media.

Posted by Steve Layman at 6:29 AM No comments:

On a warm April afternoon in 1873, the financier Jay Gould took time off from counting his money to have lunch at Delmonico's, the fanciest restaurant in town.  While he was eating, a lawyer walked over to his table, cocked his fist, and punched him in the face.

A series of spectacular financial triumphs—some said swindles—had made Gould fabulously rich.  Now, at age thirty-six, he was the most notorious businessperson in the country.  Like others who tried to claw back money from Gould, the lawyer was getting nowhere in court.  The laws were too weak, enforcement too lax, and the judges were crooked.  Gould had them in his pocket.

Oysters and Veuve Cliquot were the rule at Delmonico's.  The biftek was served au naturel.  For most people, a meal cost a week's wages.  For the rich, it was a place to enjoy their wealth, not pick fights.  Joseph Marrin, the lawyer, didn't care.  Frustrated to the point of rage, he took justice into his own hands and clocked Gould in front of the lunch crowd.  In a piece called "Gould's Nose," The New York Times declared Marrin a hero and worried about a pileup if others followed his lead. "The flattening of Gould's nose," it wrote, "would be an incidence of hourly occurrence."

The secret of happiness is this: let your interests be as wide as possible, and let your reactions to the things and persons that interest you be as far as possible friendly rather than hostile.

-Bertrand Russell, The Conquest of Happiness

It is a vicious thing some writers do, to excite the minds of readers with the big profits available in real estate while downplaying the work and the risks required to make such returns.

Solomon was busy judging others,when it was his personal thoughtsthat were disrupting the community.

His crown slid crooked on his head.He put it straight, but the crown wentawry again. Eight times this happened.

Finally he began to talk to his headpiece.“Why do you keep tilting over my eyes?”

“I have to. When your power loses compassion,I have to show you what such a condition looks like.”

Immediately Solomon recognized the truth.He knelt and asked forgiveness.The crown centered itself on his crown.

When something goes wrong, accuse yourself first.Even the wisdom of Plato or Solomoncan wobble and go blind.

Listen when your crown reminds youof what makes you cold toward others,as you pamper the greedy energy inside.

Posted by Steve Layman at 5:15 AM No comments:

Email ThisBlogThis!Share to TwitterShare to FacebookShare to Pinterest
Labels: poetry

Be patient; the waiter is trying.

Posted by Steve Layman at 6:57 AM No comments:

But pessimism holds a special place in our hearts.  Pessimism isn't just more common than optimism.  It also sounds smarter.  It's intellectually captivating, and it's paid more attention than optimism, which is often viewed as being oblivious to risk.

Before we go further we should define what optimism is.  Real optimists don't believe that everything will be great.  That's complacency.  Optimism is a belief that the odds of a good outcome are in your favor over time, even when there will be setbacks along the way.

-Morgan Housel, The Psychology of Money

Dormant ties* are the neglected value in our networks, and givers have a distinctive edge over takers in unlocking this value.

-Adam Grant, Give and Take: Why Helping Others Drives Our Success

*Dormant ties are people you used to see often or knew well but with whom you have fallen out of contact.

Posted by Steve Layman at 6:46 AM No comments:

Understanding the "other" is a precondition to be able to speak persuasively and develop options that resonate for them. . . . In other words: listen, listen again, and listen some more.

-Chris Voss, Never Split The Difference: Negotiating As If Your Life Depended On It

Posted by Steve Layman at 6:40 AM No comments: 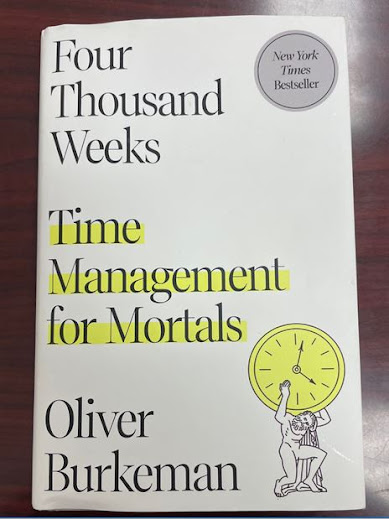 The average human lifespan is absurdly, terrifyingly, insultingly short.  But that isn't a reason for unremitting despair, or for living in an anxiety-fueled panic about making the most of your limited time.  It's a cause for relief.  You get to give up on something that was always impossible—the quest to become the optimized, infinitely capable, emotionally invincible, fully independent person you're officially supposed to be.  Then you get to roll up your sleeves and start work on what's gloriously possible instead.

Posted by Steve Layman at 4:00 PM No comments:

But financial crises follow a rhythm of boom and bust through the ages.  Countries, institutions, and financial instruments may change across time, but human nature does not. . . .Technology has changed, the height of humans has changed, and fashions have changed.  Yet the ability of governments and investors to delude themselves, giving rise to periodic bouts of euphoria that usually ends in tears, seems to remain a constant.

-from the beginning and end of the Reinhart and Rogoff tome, This Time Is Different:  Eight Centuries of Financial Folly

Posted by Steve Layman at 8:39 PM No comments: