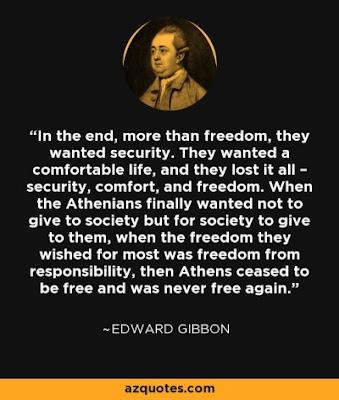 via
Posted by Steve Layman at 7:34 AM No comments:

Email ThisBlogThis!Share to TwitterShare to FacebookShare to Pinterest
Labels: Be careful what you wish for, Freedom, Responsibility

via
Posted by Steve Layman at 7:53 PM No comments:

Email ThisBlogThis!Share to TwitterShare to FacebookShare to Pinterest
Labels: Uh-oh


"God!  The country that produced George Washington has got this collection of crumb-bums!

-Barbara Tuchman, on the 1980 presidential candidates

In case you needed reminding, Ronald Reagan was the 1980 Republican candidate, after primary challenges from Howard Baker, Bob Dole, Lowell Weicker, John Anderson, Philip Crane, John Connally, and George H. W. Bush.  Jimmy Carter, the incumbent president, was the Democratic candidate, after besting Teddy Kennedy for the nomination.  John Anderson, not pleased to be left out of the fun, then ran as an independent, gathering over 5,700,000 votes.

Posted by Steve Layman at 7:47 PM No comments:


Since you need to have a network to be successful, can you build one and still feel good about yourself?  Even if you're an introvert?
To answer these questions, let's take a look at Adam Rifkin.  In 2011, Fortune magazine named him the best networker in Silicon Valley.  Guess what?  Adam's a shy introvert.  He's also the nicest guy you'll ever meet.  In fact, he goes by the nickname "Panda."
What's Panda's secret to networking?   Be a friend.  Yeah, it's that simple.  Networking isn't just a skill anybody can learn.  It's a skill you already know.  Make friends.

-Eric Barker,  Barking Up The Wrong Tree:  The Surprising Science Behind Why Everything You Know About Success Is (Mostly) Wrong

Posted by Steve Layman at 6:48 AM No comments:


"It is better to give than to receive.  Look for opportunities to do something for the other person, such as sharing knowledge or offering an introduction to someone that person might not know but would be interested in knowing.  Do not be transactional about networking.  Do not offer something because you want something in return.  Instead, show a genuine interest in something you and the other person have in common."

-Adam Rifkin, as quoted by Eric Barker
Posted by Steve Layman at 6:48 AM No comments:


Still, why go to all this trouble?  The unexamined life is certainly worth living; an unreflective surfer should keep on surfing until the last of his or her blessed days.  Why then devote a life to formulating answers to questions that may not have what people would readily call "answers"?   For me at least, the value in philosophy and in surfing is not so different.  Both are fun!  But more to the point, waves and ideas are often sublime, or beautiful, or both, and in patiently attending to them, you see and feel ever more of what is easily missed.  You gain ever deeper understanding, ever greater attunement, in your thinking and your actions.  The superficiality of life, the mania for status or money or power, along with its contagious anxieties, then fades into the background, becoming white noise in a peaceful life lived by its own joyous music.

-Aaron James,  Surfing With Sartre:  An Aquatic Inquiry Into A Life Of Meaning

Posted by Steve Layman at 6:37 AM No comments:


The curse of modern politics is an epidemic of good intentions and bad outcomes. Policy after policy is chosen and voted on according to whether it means well, not whether it works.

Posted by Steve Layman at 7:18 AM No comments:

"One of the worst positions to be in as an investor is being a forced seller of your shares at an inopportune time. "

--Ben Carlson, as extracted from here

Never forget that the IRS bats last.  You don't know the full truth about your investment until it is sold and the taxman paid.
Posted by Steve Layman at 5:10 PM No comments:

Posted by Steve Layman at 7:12 PM No comments:

Grateful for the limited time window...... 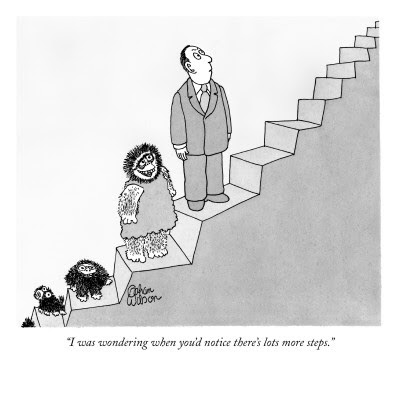 History has shown that all species will either go extinct or evolve into another species, though with our limited time window that is hard for us to see.  But we do know that what we call mankind was simply the result of DNA evolving into a new form about two hundred thousand years ago, and we know that mankind will certainly either go extinct or evolve into a higher state.

cartoon via
Posted by Steve Layman at 7:10 PM 1 comment: 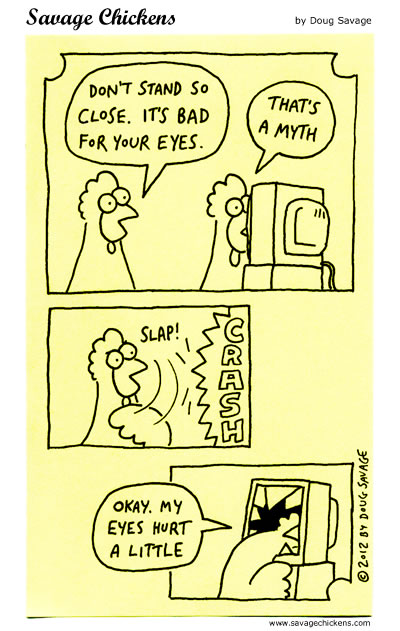 Throughout the inhabited world, in all times and under every circumstance, myths of man have flourished; and they have been the living inspiration of whatever else may have appeared out of the activities of the human body and mind.  It would not be too much to say that myth is the secret opening through which the inexhaustible energies of the cosmos pour into the human cultural manifestation.

-Joseph Campbell,  The Hero With A  Thousand Faces

Posted by Steve Layman at 6:55 PM No comments:


Cosmologists used to think the universe was totally timeless: no beginning, no end. That might sound mind-melting, but it’s easier on the scientific brain than figuring out what a set starting point would mean, let alone when it would be.

thanks Craig
Posted by Steve Layman at 7:06 AM No comments:

Email ThisBlogThis!Share to TwitterShare to FacebookShare to Pinterest
Labels: Good question, Universe, Unsettled science, Your guess is as good as mine

"The economic machine that we’ve built in the United States has done extraordinary things and I can’t wait to see what we come up with in the future. "

Posted by Steve Layman at 7:26 PM No comments:


"Of all the amazing deeds of bravery of the war, I regard MacArthur's personal landing at Atsugi as the greatest of the lot," Winston Churchill wrote afterward.  The former prime minister, a connoisseur of courage, was speaking of the American general's daring flight to the heart of enemy territory at the close of the Pacific war in 1945.  The Japanese emperor, following the atomic bombing of Hiroshima and Nagasaki, had called on his subjects to cease fighting, yet more than twenty divisions of soldiers, who had been prepared to give their last drop of blood to keep the Americans from securing a foothold on Japan's sacred soil, retained their weapons and their positions on the Kanto Plain.  Kamikaze pilots, some having already received the rites for the dead, awaited only a word to carry out their suicide missions.  Squads of young civilians, outraged at the emperor's call for surrender, stormed about Tokyo and nearby Yokohama vowing to resist to the end.
Douglas MacArthur, as the commander of the U. S. Army forces in the Pacific, would receive the formal Japanese surrender on board the battleship Missouri in Tokyo Bay.  Prudence suggested he arrive with the ship, its powerful escort and the protection the vessels and their guns provided.  MacArthur refused.  He insisted he would enter Japan ahead of the navy, protected only by the moral force that came with righteous victory.  His aides urged him to reconsider.  Who knew what some bitter-ender might do?  All it took was one bullet, one grenade, and the general would be a dead man.  Worse, an assassination might rekindle the Japanese war spirit.  If he must enter ahead of the navy, he should wait for more army troops.  At the very least, he should be accompanied to Atsugi, the air base for Tokyo, by a substantial guard of well-armed soldiers.
He waved aside the worries.  He declared that he would travel to Atsugi alone, with only his airplane's crew and his personal staff.  His courage would be all the shield he required.  He knew the Asian mind.  "Years of overseas duty had schooled me well in the ways of the Orient," he later wrote.  The Japanese would understand his action and be more impressed by one man alone than by any number of ships or regiments.

-H. W. Brand,  The General vs. The President:  MacArthur and Truman At The Brink Of Nuclear War

Posted by Steve Layman at 7:18 PM No comments:

Posted by Steve Layman at 6:28 AM No comments:


Virgil thought about the woman and the daughter as he drove back.  Had Mom been hitting on him, just the lightest, mildest of hits?  What was the sadness in the small girl's eyes?  Had she seen other men spoken to when Dad wasn't there?
The whole thing seemed less than an invitation to romance than an invitation to a story of some kind.  Not journalism, a short story.  Something Jim Harrison might write.
Virgil had had an interest in short stories when he was in college, but journalism seemed more immediate, something with its claws in the real world.  The older he got, though, the wider he found the separation between reported facts, on one hand, and the truth of the matter on the other hand.  Life and facts were so complicated that you never got more than a piece of them.  Short stories, though, and novels, maybe, had at least a shot at the truth.

-John Sanford, as culled from Chapter 17 of Heat Lightning

Posted by Steve Layman at 9:32 PM No comments:

Trying to protect his students' innocence
he told them the Ice Age was really just
the Chilly Age, a period of a million years
when everyone had to wear sweaters.
And the Stone Age became the Gravel Age,
named after the long driveways of the time.
The Spanish Inquisition was nothing more
than an outbreak of questions such as
“How far is it from here to Madrid?”
“What do you call the matador’s hat?”
The War of the Roses took place in a garden,
and the Enola Gay dropped one tiny atom
on Japan.
The children would leave his classroom
for the playground and torment the weak
and the smart,
mussing up their hair and breaking their glasses,
while he gathered his notes and walked home
past flower beds and white picket fences,
wondering if they would believe that soldiers
in the Boer War told long, rambling stories
designed to make the enemy nod off.
-Billy Collins

Posted by Steve Layman at 5:10 PM No comments:

Email ThisBlogThis!Share to TwitterShare to FacebookShare to Pinterest
Labels: History, not the way I remember it, poetry


"Most of life's greatest opportunities come out of moments of struggle;  it's up to you to make the most of these tests of creativity and character."

-Ray Dalio
Posted by Steve Layman at 4:26 PM No comments:


"Life truly lived is a risky business, and if one puts up too many fences against the risks, one ends up shutting out life itself."

Posted by Steve Layman at 2:19 PM No comments:


"This life is not godliness, but growth in godliness;  not health, but healing; not being, but becoming; not rest, but exercise.  We are not now what we shall be, but we are on the way;  the process is not yet finished, but it has begun;  this is not the goal, but it is the road;  at present all does not gleam and glitter, but everything is being purified."

Posted by Steve Layman at 2:10 PM No comments:

Email ThisBlogThis!Share to TwitterShare to FacebookShare to Pinterest
Labels: Faith, It's a process, Life Its Ownself, On the road again, Quotes
Newer Posts Older Posts Home
Subscribe to: Posts (Atom)