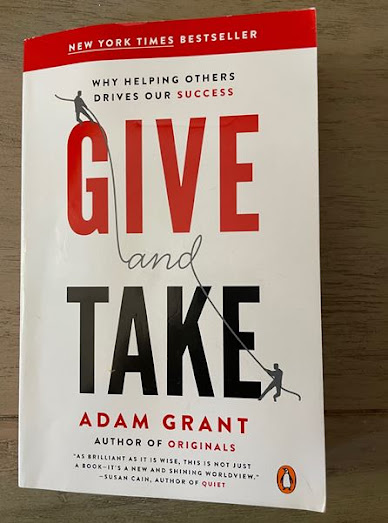 Because he maintains such a large network, Adam Rifkin has a growing number of dormant ties—people he used to see often or know well, but with whom he has fallen out of contact.  According to management professors Daniel Levin, Jorge Walter, and Keith Murnighan,  "adults accumulate thousands of relationships over their lifetimes, but, prior to the Internet, they actively maintained no more than 100 to 200 at any given time."  For the past few years, these professors have been asking executive to so something they dread: reactivate their dormant tines. . . Dormant ties are the neglected value in our networks, and givers have a distinctive edge over takers in unlocking this value

If takers are selfish and failed givers are selfless, successful givers are otherish: they care about benefiting others, but they also have ambitious goals for advancing their own interests.

10.  Seek Help More Often:  If you want other people to be givers, one of the easiest steps is to ask.  When you ask for help, you're not always imposing a burden.  Some people are givers and by asking for help, you're creating an opportunity for them to express their values and feel valued.  By asking for a five-minute favor, you impose a relatively small burden—and if you ask a matcher, you can count on having an opportunity to reciprocate.  Wayne and Cheryl Baker note that people can "Start the spark of reciprocity by making requests as well as helping others.  Help generously and without thought of return, but also ask often for what you need."

Posted by Steve Layman at 11:46 AM No comments:

Email ThisBlogThis!Share to TwitterShare to FacebookShare to Pinterest
Labels: books, Give and Take, recommendations

Posted by Steve Layman at 8:05 AM No comments: