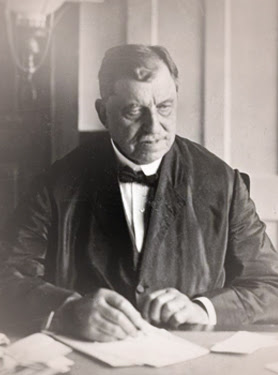 This blogger has long been a fan of Russell Conwell and his Acres of Diamonds.   Earlier in the week, I started reading Jim Newton's biography of Earl Warren, one of the more influential Chief Justices in the history of our Supreme Court.  On page 22 was this passage:

"Methias was far more vehement about education than he was about God.  He supported Earl's desire to go to college, and he occasionally would take his son to hear speakers as they traveled through the area.  One afternoon, the two traveled together to hear an address in town.  Earl never forgot it.
"The speaker was Russell H. Conwell, and his talk, 'Acres of Diamonds,' was one of the most acclaimed pieces of oratory of its day.  Conwell, the founder of Temple University, traveled across America delivering versions of his talk thousands of times in the early twentieth century.  He would arrive in a small town, talk to residents, and hear the story of their hamlet.  When he rose to speak that afternoon, he would weave their stories into his speech, identifying for the crowd the 'diamonds' in their town or village and reminding them to treasure those aspects of their lives and community.  One day, Conwell's journey brought him to Bakersfield.
"Religious in fervor, moral in tone, yet practical in its advice, the speech foreshadowed much of what Warren would become.  'Greatness consists not in the holding of some future office, but really consists in doing great deeds with little means and the accomplishment of vast purposes from the private ranks of life,' Conwell said.  'He who can give to this city better streets and better sidewalks, better schools and more colleges, more happiness and more civilization, more of God, he will be great anywhere.
"Sitting in front of the stage, looking up at the orator, Earl Warren was spellbound.  'I can still see his towering form and hear his powerful voice as he told his never-to-be-forgotten story,' Warren recalled a half century later.  'Of all the lectures I heard in my youth, this one made the greatest impression on my young mind.'"
Posted by Steve Layman at 1:02 AM

Email ThisBlogThis!Share to TwitterShare to FacebookShare to Pinterest
Labels: books, One of the great ones, Philly, Story Telling