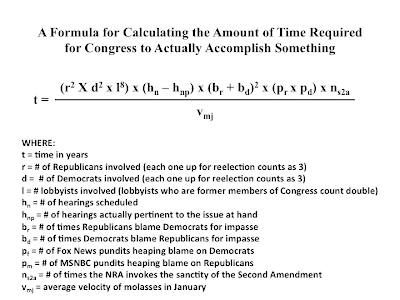 The problem is that Congress has delegated its responsibility for governing to agencies and their bureaucracy, who are more than eager and willing to create new illegalities in Congress's name.

"Government has become ungovernable;  that is, it cannot leave off governing.  Law has become lawless; that it, it cannot see where laws should stop.  The chief feature of our time is the meekness of the mob and the madness of the government."       -Gilbert Keith Chesterton, as excerpted from the English philosopher and writer's 1917 work, Eugenics and Other Evils: An Argument Against the Scientifically Organized State

thanks to Bilbo for the formula and Ka-Ching! for the quote
Posted by Steve Layman at 12:42 AM