"A man provided with paper, pencil, and rubber, and subject to strict discipline, is in effect a universal machine."

"Science is a differential equation. Religion is a boundary condition."

"I am not very impressed with theological arguments whatever they may be used to support. Such arguments have often been found unsatisfactory in the past. In the time of Galileo it was argued that the texts, 'And the sun stood still... and hasted not to go down about a whole day' (Joshua x. 13) and 'He laid the foundations of the earth, that it should not move at any time' (Psalm cv. 5) were an adequate refutation of the Copernican theory."

"We can only see a short distance ahead, but we can see plenty there that needs to be done."

"I believe that at the end of the century the use of words and general educated opinion will have altered so much that one will be able to speak of machines thinking without expecting to be contradicted."

"The idea behind digital computers may be explained by saying that these machines are intended to carry out any operations which could be done by a human computer."

"We may hope that machines will eventually compete with men in all purely intellectual fields."

"No, I'm not interested in developing a powerful brain. All I'm after is just a mediocre brain, something like the President of the American Telephone and Telegraph Company."

"A computer would deserve to be called intelligent if it could deceive a human into believing that it was human."

Alan Turing (1913-1954) was one smart dude who was ill-treated because of his sexual orientation.  His efforts as a code breaker during the Second World War were noteworthy.  He also laid much of the foundation for what could be loosely called "computer science."   Full wiki is here. A deeper look is here. 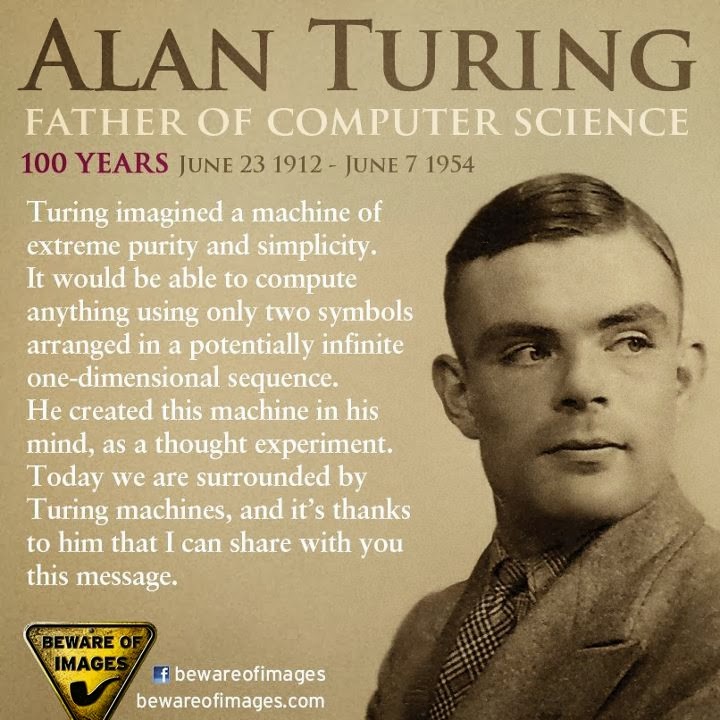