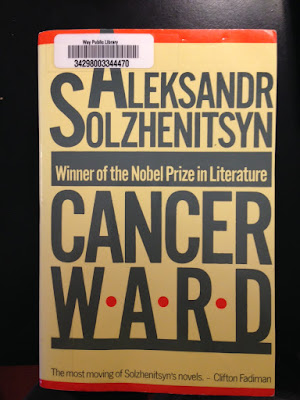 The door was usually shut tight, but at the moment it was slightly ajar.  It was dark inside.  In the darkness he could hear a heavy gasping noise.  There was no nurse in sight.  Either they were with other patients or they were asleep.
Oleg opened the door a bit more and edged his way in.
Dyomka was asleep.  Shulubin was the one gasping and groaning.
Oleg went right into the room.  Now the door was open there was a little light coming in from the corridor.  "Aleksi Filippovich ..." he said.
The gasping stopped.
"Aleksei Filippovich ... Do you feel bad?"
"What?"  The word came out in another gasp.
"Do you feel bad?  Do you want your medicine?  Shall I turn a light on?"
"Who is it?"  Terrified, the man breathed out and coughed.  Then the groaning began again because the coughing was too painful.
"It's Kostoglotov.  Oleg."  He was now right by the bed, bending over it.  He was beginning to distinguish Shulubin's great head lying on the pillow.  "What can I get you?  Shall I call a nurse?"
"No-thing."  Shulubin breathed the word out.
He didn't cough or groan again.  Oleg could distinguish more and more detail.  He could even make out the little curls of hair on the pillow.
"Not all of me shall die,"  Shulubin whispered.  "Not all of me shall die."
He must be delirious.
Kostoglotov groped for the man's hot hand lying on the blanket.  He pressed it lightly.  "Aleksei Filippovich," he said, "you're going to live!  Hang on, Aleksei Filippovich!"
"There's a fragment, isn't there? ... Just a tiny fragment,"  he kept whispering.
It was then it struck Oleg that Shulubin was not delirious, that he'd recognized him and was reminding him of their last conversation before the operation.  He had said, "Sometimes I feel quite distinctly that what is inside me is not all of me.  There's something else, sublime, quite indestructible, some tiny fragment of the universal spirit.  Don't you feel that?"