At the bookstore:  John Le Carré......A Small Town In Germany 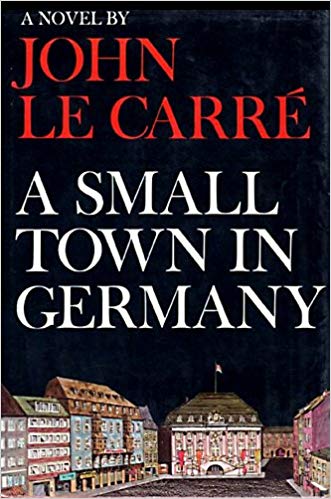 "Why don't you get out and walk?  I would if I was your age.  Quicker that sitting with this scum."
"I'll be all right," said Cork, the Albino coding clerk, and looked anxiously at the older man in the driving seat beside him.  "We'll just have to hurry slowly,"  he added in his most conciliatory tone.  Cork was a Cockney, bright as paint, and it worried him to see Meadowes all het up.  "We'll just have to let it happen to us, won't we Arthur?"
"I'd like to throw the whole bloody lot of them in the Rhine."
"You know you wouldn't really."
It was Saturday morning, nine o'clock.  The road from Friesdorf to the Embassy was packed tight with protesting cars, the pavements were lined with photographs of the Movement's leader, and the banners were stretched across the road like advertisements at a rally:  The West Has Deceived us;  Germans Can Look East Without Shame.  End The Coca-Cola Culture Now!  At the very center of the long column sat Cork and Meadowes, becalmed while the clamor of horns rose all around them in unceasing concert.  Sometimes they sounded in series starting at the front and working slowly back, so that their roar passed overhead like an airplane; sometimes in unison, dash-dot-dash, K for Karfeld out elected leader; and sometimes they just had a free-for-all, tuning for the symphony.

Email ThisBlogThis!Share to TwitterShare to FacebookShare to Pinterest
Labels: 1969, books, Fifty Years Ago