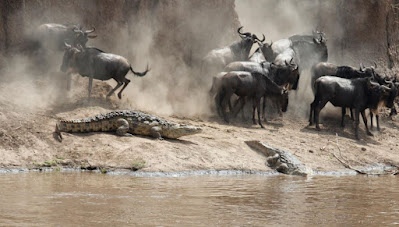 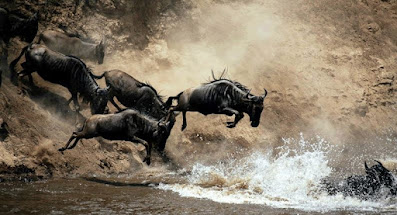 I spent ten days on the roof as we flowed through the migration and the migration flowed around us.  It was always amazing to watch Uncle John stop and film in the bush.  Camera crews from the BBC, the Disney Channel, National Geographic, and other networks were fighting for the best position at various crossing points so they could capture the tumult of thousands of wildebeests massing to plunge into croc-infested waters.  Uncle John was nowhere to be seen.  On the advice of some Masai friends, he'd be asleep under his frayed bush hat, half a mile from where the action was about to take place.  Sure enough, at the last moment, a single wildebeest would break rank, run the half-mile down to where Uncle John was parked, causing an avalanche of pounding hooves to follow suit.

"Buddy, never follow the rules," he'd tell me.  "Stick with the local knowledge and build relationships—that's how you get the shots."  Then he'd offer up his trademark vampire smirk, having just canned to best high-action sequence of the day.  After the first wildebeest jumped, thousands of others likewise took the plunge, and they churned through the water, swimming nose to tail, battling the current.  Crocodiles began slipping off the banks in pursuit.  The water boiled, foaming white as the crocodiles' powerful tails thrashed back and forth.  Their jaws mashed down on wildebeests, pulling them beneath the surface.  The air shrilled with wildebeests' alarm calls as they disappeared from sight.  The ones who made it to the other side, heaving with exhaustion, found lions in wait.  After so many hours of sitting around, I found the scene unbelievably thrilling.

-Boyd Varty, Cathedral of the Wild: An African Journey Home