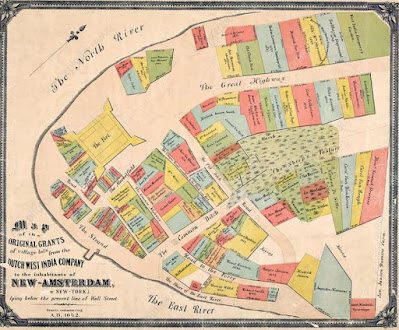 On May 27, 1794, Phebe gave birth to her fourth child.  She underscored the sense of continuity by naming him Cornelius, too, though they called the boy Cornele.  She cooed over him in English.  Phebe had first met her husband in Port Richmond, a heavily Dutch village, where she had been working as a servant in the home of a minister, but she herself came from an old English family in New Jersey.

In the town of New York this sort of intermarriage surprised no one.  There the Dutch has fallen to less than half the population as early as 1720; now they were less a minority than an interbred strand among its 33,000 residents.  As early as the rule of Petrus Stuyvesant in 1647, the village then named New Amsterdam had grown into a rather cosmopolitan place.  Stuyvesant governed under the authority of the Dutch West India Company, created to mobilize merchant capital to advance Dutch interests in the New World.  Under his administration, the little seaport came to reflect the commercial orientation of the Netherlands, the most industrious nation of seventeenth-century Europe.  As in the mother country, the primacy of trade, foreign trade in particular, had fostered a tolerance of strangers and disparate creeds (at a time when being a Quaker was a hanging offence in Massachusetts), and that tradition persisted.