﻿ One of the oldest buildings on Newark's Downtown Square sits at 22 North Park Place.  The above picture has been dated to around 1859.  We know this because on the original photograph (that this is a reduction of) you can see the picture of Stephen Douglas, he of the Lincoln/Douglas debate fame, on the placard in front of the building.  The building is thought to have been constructed in the 1830s, originally as a stage coach stop and tavern that evolved into this building as a hotel.

﻿This photo of 22 North Park Place, judging by the cars, was taken sometime in the late 1950's.  The fine wrought iron railing is missing from the second floor.  The hitching posts are gone from the street and parking meters have appeared.

This photo of 22 North Park Place is about five years old.  A careful observer might note that our formerly three story building is now a two story building.  Apparently there was a fire on the third floor.  Instead of rebuilding it, they just shrank the building.  Also, in the early 1960's some extremely successful salesmen of blue ceramic tiles and blue sheet metal rolled through Newark. When we started investing in downtown Newark real estate in the mid-1980s more than a dozen storefronts had been re-surfaced in a manner similar to the above photo.  It might have looked good in 1962.  There are only two remaining examples in the downtown of this sort of facade design.  One of them remains at 22 North Park, just the east half of the building though.  The west half was recently "fixed."   The blue sheet metal looked tired and dated so we pulled it off, re-opened the old windows that had been blocked in and installed new windows, added an imitation wrought iron railing, added some sandstone block where needed, and reworked the lower storefront.  And voila!  The results are below.  We kind of like it.  We had plans to re-do both halves of the building, but budget constraints suggested now was not the right time.  Since completion we have received many a comment suggesting the juxtaposition of the new old and the old new is worth leaving alone.  We agree. 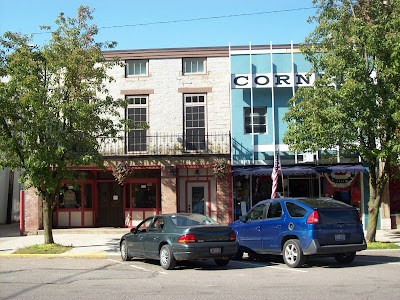 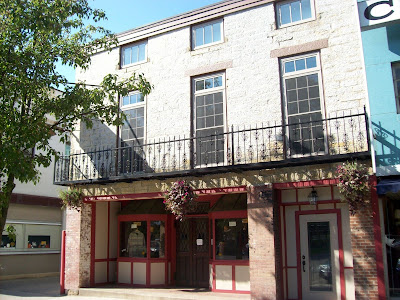