An excerpt from Randy Pausch's The Last Lecture:

Shatner stayed for three hours and asked tons of questions.  A colleague later said to me:  "He just kept asking and asking. He doesn't seem to get it."
But I was hugely impressed.  Kirk, I mean, Shatner, was the ultimate example of a man who knew what he didn't know, was perfectly willing to admit it, and didn't want to leave until he understood it.  I wish every grad student had that attitude.
During my cancer treatment, when I was told that only 4% of pancreatic cancer patients live five years, a line from the Star Trek movie The Wrath of Khan came into my mind.  In the film, Starfleet cadets are faced with a simulated training scenario where, no matter what they do, their entire crew is killed.  The film explains that when Kirk was a cadet, he reprogrammed the simulation because "he didn't believe in the no-win scenario."
Over the years, some of my sophisticated academic colleagues have turned up their noses at my Star Trek infatuation.  But from the start, it has never failed to stand me in good stead.
After Shatner learned of my diagnosis, he sent me a photo of himself as Kirk.  On it he wrote:  "I don't believe in the no-win scenario." 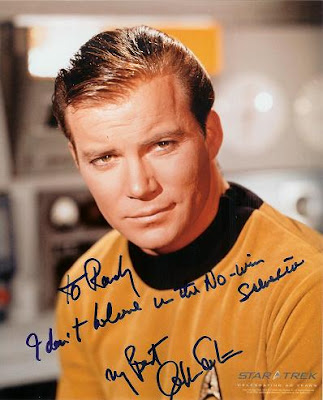