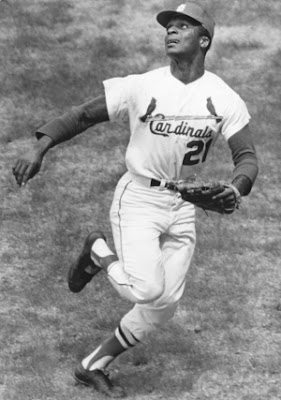 A letter written in 1969...............
Dear Mr. Kuhn,
After 12 years in the major leagues, I do not feel that I am a piece of property to be bought and sold irrespective of my wishes.  I believe that any system that produces that result violates my basic rights as a citizen and is inconsistent with the laws of the United States and the several states.
It is my desire to play baseball in 1970 and I am capable of playing.  I have received a contract from the Philadelphia club, but I believe I have the right to consider offers from other clubs before making any decisions.  I, therefore, request that you make known to all the major league clubs my feelings in this matter, and advise them of my availability for the 1970 season.
Curt Flood

Ah, the joy of mixed emotions.  While I was a youngster growing up in Philly, the Phillies generally fielded terrible baseball teams.  Curt Flood was a star with the St. Louis Cardinals.  When the Cards traded him to the Phillies, Flood essentially said, "screw this, I'm not playing in Philadelphia."  Ouch, that hurt my fragile teenage psyche.  Having said that, I knew he was correct.  The notion that a person should be free to offer their labor to whomever they choose just seemed common sense fair play to me.  In 1970, Major League Baseball denied their players that right.  Players got told who they were going to play for, and for how much.  Their choice was to play under those terms, or not play at all.
In 1970, Flood challenged the system.  The Supreme Court heard the case in 1972, ruling against Flood and in favor of Major League Baseball by a 5-3 margin.  Just because he lost, didn't make him wrong.  Four years later, Major League Baseball opened the door to free agency.  Free to bargain for the first time, major league players struck the vein of gold.  They owe Curt Flood big time.
Posted by Steve Layman at 12:45 AM