The head of the New York Fed seems to believe that the problem of banks that are "too big to fail" can be solved without making the "too big" banks smaller.  Even casual readers of this blog will know that I am not an economist, nor a banker, nor a regulator.  I am, however, a frequent and interested observer of human nature.  Allow me the suspicion that regulators and their regulations will never keep pace with the rocket scientists on Wall Street.  Out here in sunny Ohio, we believe the only way to end the problem of banks "too big to fail" is to let them fail when they do.  If you find that option unpalatable, then make them get smaller.  For those who believe that "market discipline," restructuring "compensation practices," or some vague "holistic approach" will solve the "too big" problem, then you can find your position supported by William C. Dudley in this speech.  Count me in favor of breaking them up. 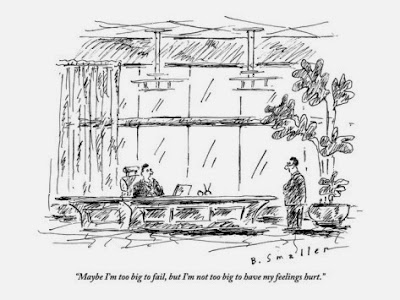