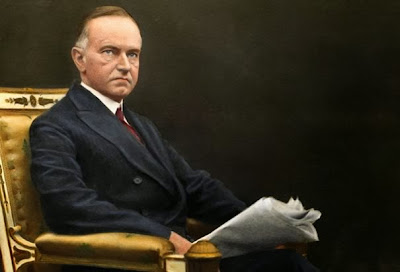 Turns out that our thirtieth president (1923-1929), far from being silent, said some very interesting things.  Coolidge seemed to spend most of his time as president saying "No" to requests for the government to do something.  Based on many of his quotes, those "Noes" were principle driven.  Here is a smattering of words attributed to him:

Christmas is not a time nor a season, but a state of mind. To cherish peace and goodwill, to be plenteous in mercy, is to have the real spirit of Christmas.

The Constitution is the sole source and guaranty of national freedom.

I believe in the American Constitution. I favor the American system of individual enterprise, and I am opposed to any general extension of government ownership, and control. I believe not only in advocating economy in public expenditure, but in its practical application and actual accomplishment. I believe in a reduction and reform of taxation, and shall continue my efforts in that direction.

It is much more important to kill bad bills than to pass good ones.

To live under the American Constitution is the greatest political privilege that was ever accorded to the human race.

I sometimes wish that people would put a little more emphasis on the observance of the law than they do on its enforcement. It is a maxim of our institutions, that the government does not make the people, but the people make the government

We live in an age of science and abounding accumulation of material things. These did not create the Declaration. Our Declaration created them. The things of the spirit come first. Unless we cling to that, all of our material prosperity, overwhelming though it may appear, will turn to a barren scepter in our grasp. If we are to maintain the great heritage bequeathed to us, we must be like minded as the Founders who created. We must not sink into a pagan materialism. We must cultivate the reverence which they had and for the things that are holy. We must follow the spiritual and moral leadership which they showed. We must keep replenished, that they may glow with a more compelling flame, the altar fires before which they worshipped.

It is not industry, but idleness, that is degrading

Workmen’s compensation, hours and conditions of labor are cold consolations, if there be no employment

Nothing in the world can take the place of persistence. Talent will not; nothing is more common than unsuccessful men with talent. Genius will not; unrewarded genius is almost a proverb. Education will not; the world is full of educated derelicts. Persistence and determination alone are omnipotent. The slogan "press on" has solved and always will solve the problems of the human race.

I have noticed that nothing I have never said ever did me any harm.
Posted by Steve Layman at 12:45 AM

Email ThisBlogThis!Share to TwitterShare to FacebookShare to Pinterest
Labels: Quotes