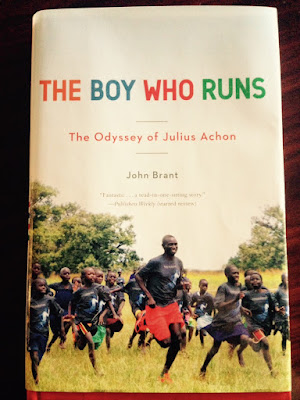 First to set forth a few facts:  John Brant is a very good writer;  Julius Achon is a very good human being;  Uganda in the late 20th century was a dangerous and unpleasant place; Joseph Kony was evil.

Brant offers the compelling story of Achon, who rises from a poor Ugandan village but can never escape its gravitational pull.  Achon's self-developed running ability, and will, take him on a journey from nowhere to college stardom in America to Olympic hopefulness.

The torment of the family, village, and history he left behind never ebbs.  How Achon conquers that torment is the story behind the story.

Ed. Note:  In the interest of full disclosure, Brant may be my longest term friend.  We first met at Merion Elementary school in 1957.