Reading this article on the James Webb telescope took me way back in time when the news was news with no embellishment, slant, or agenda other than informing.  I found it very refreshing and recommend it to you. 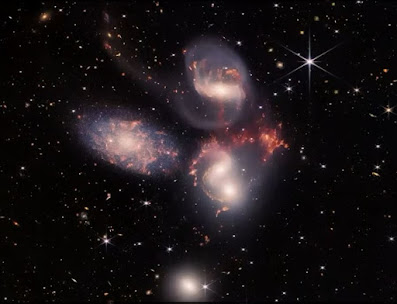 By comparison, it takes light about 1 second to travel from the moon and 8 minutes from the sun. Therefore, we see the sun as it was 8 minutes ago. If it were to disappear, we would find out 8 minutes later.

Webb also doesn't orbit Earth, like its predecessor Hubble does, but rather orbits the sun 1 million miles (1.5 million km) from our planet at what is called the second Lagrange point or L2.

The Earth is not visible in any of the images. That is because the bottom of the James Webb Space Telescope, which is a tennis court sized shield, is always facing the sun to block it out.   It means that the Earth is always between James Webb and the sun as well, so would never be captured by the telescope.

When a telescope looks further away, it is also looking back in time. It takes time for the light the telescope is receiving to travel through space. Therefore, we see objects not as they are now but as they were at the time when they released the light that has travelled for billions of years across the universe to reach us.

What we are seeing is just a minor glimpse of images, science, knowledge yet to come.