...........that one person cannot make much of a difference in this crazy world of ours - read the stories of eleven people you never heard of who have made unbelievable differences.   A sample: 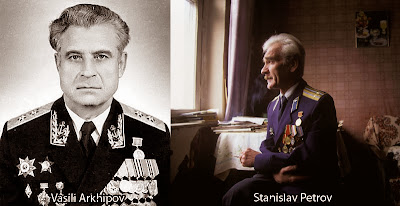 On September 26, 1983, Lt. Col. Stanislav Petrov was duty officer at Serpukhov-15, the secret bunker outside Moscow that monitored the Soviet Union’s early-warning satellite system. Shortly after midnight, one of the satellites signaled Moscow that the United States had launched five ballistic missiles at Russia. The responsibility fell to Petrov, then a 44-year-old lieutenant colonel, to make a decision: Was it for real? The alarm came during tense times. Just weeks prior, Soviet pilots had shot down Korean Air Lines Flight 007 and NATO military exercise, known as Able Archer were about to begin.
Despite the electronic evidence, Petrov decided – and advised the others – that the satellite alert was a false alarm, a call that may have averted a nuclear holocaust. But he was relentlessly interrogated afterward, was never rewarded for his decision and today is a long-forgotten pensioner living in a town outside Moscow. [Source]
Vasili Alexandrovich Arkhipov (30 Jan. 1926 – 19 Aug. 1998) was a Soviet Navy officer. During the Cuban Missile Crisis, he prevented the launch of a nuclear torpedo and likely prevented a nuclear war. Thomas Blanton (then director of the National Security Archive) said in 2002 that “a guy called Vasili Arkhipov saved the world”. [Source]
On 27 October 1962, during the Cuban Missile Crisis, a group of eleven United States Navy destroyers and the aircraft carrier USS Randolph located the diesel-powered nuclear-armed Soviet Foxtrot-class submarine B-59 near Cuba. Despite being in international waters, the Americans started dropping practice depth charges, explosives intended to force the submarine to come to the surface for identification. There had been no contact from Moscow for a number of days and the sub was too deep to monitor any radio traffic, so those on board did not know whether war had broken out. The captain of the submarine, Valentin Grigorievitch Savitsky, believing that a war might already have started, wanted to launch a nuclear torpedo.
Three officers on board the submarine – Savitsky, the political officer Ivan Semonovich Maslennikov, and the second-in-command Arkhipov – were authorized to launch the torpedo if agreeing unanimously in favor of doing so. An argument broke out among the three, in which only Arkhipov was against the launch. Arkhipov eventually persuaded Savitsky to surface the submarine. [Source]
Posted by Steve Layman at 12:15 AM

Email ThisBlogThis!Share to TwitterShare to FacebookShare to Pinterest
Labels: History, People, the beat of a different drummer