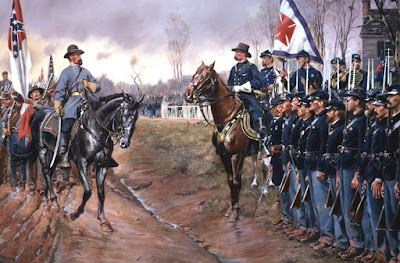 Our earnest eyes scan the busy groups on the opposite slopes, breaking camp for the last time, taking down their little shelter-tents and folding them carefully as precious things, then slowly forming ranks as for unwelcome duty.  And now they move.  The dusky swarms forge forward into gray columns of march.  On they come, with the old swinging route step and swaying battle-flags.  In the van, the proud Confederate ensign - the great field of white with canton of star-strewn cross of blue on a field of red, the regimental battle-flags with the same escutcheon following on, crowded so thick, by thinning out of men, that the whole column seemed crowned with red.  At the right of our line our little group mounted beneath our flags, the red Maltese cross on field of white, erstwhile so bravely borne through many a field more crimson than itself, its mystic meaning now ruling all.
The momentous meaning of this occasion impressed me deeply.  I resolved to mark it by some token of recognition, which could be no other than a salute of arms.  Well aware of the responsibility assumed, and of the criticisms that would follow, as the sequel proved, nothing of that kind could move me in the least.  The act could be defended, if needful, by the suggestion that such a salute was not to the cause for which the flag of the Confederacy stood, but to its going down before the flag of the Union.  My main reason, however, was one for which I sought no authority nor asked forgiveness.  Before us in proud humiliations stood the embodiment of manhood:  men whom neither toils and sufferings, nor the fact of death, nor disaster, nor hopelessness could bend from their resolve;  standing before us now, thing, worn, and famished, but erect, and with eyes looking level into ours, waking memories that bound us together as no other bond' - was not such manhood to be welcomed back into the Union so tested and assured?
Instructions had been given;  and when the head of each division column comes opposite our group, our bugle sounds out the signal and instantly our whole line from right to left, regiment by regiment in succession, gives the soldier's salutation, from the "order arms" to the old "carry" - the marching salute.  Gordon at the head of the column, riding with heavy spirit and downcast face, catches the sound of shifting arms, looks up, and taking the meaning, wheels superbly, making with himself and his horse one uplifted figure, with profound salutation as he drops the point of his sword to the boot toe;  then facing to his own command, gives word for his successive brigades to pass us with the  same position of the manual, - honor answering honor.  On our part not a sound of trumpet more, nor roll of drum;  not a cheer, nor word nor whisper of vain-glorying, nor motion of man standing against the order, but an awed stillness rather, and breath-holding, as it were the passing of the dead!

-Joshua Lawrence Chamberlain,  The Passing Of The Armies, excerpting from the chapter "Appomattox"

art work via
Posted by Steve Layman at 8:00 PM