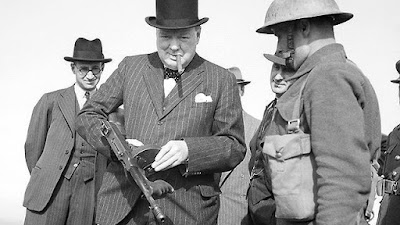 Winston Churchill should have never been prime minister of Great Britain.  He wasn't someone who "did everything right," and it was shocking that he was elected.  His contemporaries knew he was brilliant - but he was also a paranoid loose cannon who was impossible to deal with.
Initially rising up through the ranks of British politics at a steady clip (he was elected to Parliament at age twenty-six),  Churchill was eventually found lacking and deemed unsuitable for the highest offices.  By the 1930s his career was effectively over.  In many ways he was a perfect foil for Neville Chamberlain, a leader who had done everything right and was the prototypical British prime minister. ...
Churchill was a maverick.  He did not merely love his country;  he displayed a clear paranoia toward any possible threat to the empire.  He saw even Gandhi as a danger and was quite outspoken in his opposition to what was a pacifist rebellion in India.   He was the Chicken Little of Great Britain, passionately railing against all opposition to his country, great, small - or imagined.  But this "bad" quality is the key to why he is one of the most revered leaders in world history. ...
When it mattered most, Churchill's paranoia was prescient.  He didn't believe the schoolyard bully would leave them alone if they gave him their lunch money.  He knew they needed to sock him in the nose.
Churchill's zealotry - the thing that had nearly ruined his career early on - was exactly what Britain needed heading into World War II.  And thankfully the British people realized this before it was too late.

-Eric Barker,  Barking Up The Wrong Tree:  The Surprising Science Behind Why Everything You Know About Success Is (Mostly) Wrong